Cheap flights to USA become a reality.  Low-fare airline “Norwegian Air Shuttle ASA” announced a true sensation to those who dream about non-expensive trip to United States.  Next year in summer it plans to start flights from Edinburgh to New York at 65 euros one way.

According to the company’s “Norwegian Airways” CEO Bjorn Kjosas, to keep costs down, flights will be organized with the smaller U.S. airports (which offer lower fees) and using new narrow-body 189-seat Boeing 737-MAX aircrafts. These aircraft models have modern engines which overcome larger distances while consuming less fuel. “That makes us different from other airlines,” – emphasizes the manager. 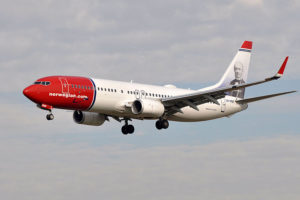 It should be emphasized that the additional services (registered baggage, food and drink, a seat reservation, headphones, blanket or other perks) are not included into price and will cost extra money.

“Norwegian Air Shuttle ASA” already carries out low-cost flights from London’s Gatwick Airport to New York for just 145 euros, but the new price will be one of the cheapest at transatlantic flights market.

Based on Reuters article.

Calculate now
Chat with us
Ask a question

...
If you continue browsing we consider you accept the use of cookies. More info
Accept